There is a graveyard of dead stars in the Milky Way. This is much larger than what we normally consider our galaxy to be. Including star debris, the Milky Way is probably three times larger.


The Milky Way is about 13 billion years old. Since then, many stars have formed and died in it. And when large stars enter a supernova, only part of it condenses into a neutron star or black hole – a huge amount of matter is also ejected. Much of this material is then picked up in turn by other objects, but some also fly away from the visible Milky Way system.

Astronomers already knew this in theory, but now researchers at the University of Sydney have successfully searched for these remnants of dead stars. The observations can be extrapolated to the effect that 30 percent of this stellar debris has been completely expelled from the galaxy.
Visible Milky Way…

“One of the problems with finding these ancient objects is that until now we had no idea where to look,” said study co-author Peter Tuthill. “The oldest neutron stars and black holes formed when the galaxy was younger and shaped differently, and then underwent complex changes over billions of years. It has been a huge task to model all of this.” 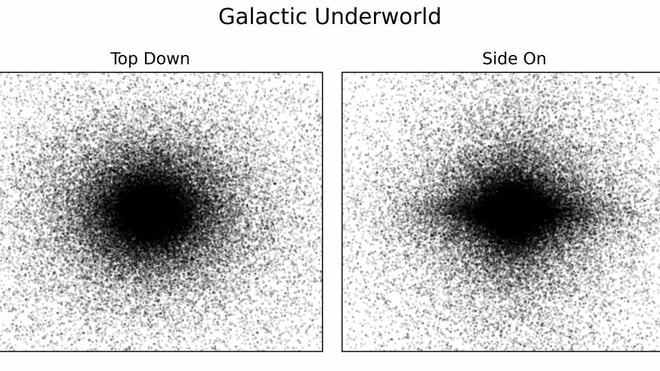 .. and the distribution of their star remains

Comparing the Milky Way’s current appearance to the new model of its stellar cemeteries reveals striking differences. The galaxy’s distinctive spiral arms seem to disappear under all the kicks of the supernova. The “galactic underworld” also appears larger and more puffy than the Milky Way because the kicks of the supernova pushed the remnant into a form of a halo around the galaxy.

See also  Neuro-Covid Researchers: A virus that damages the brain - even with mild cycles

“It was a huge shock,” said Sanjib Sharma, co-author of the study, of the models that eventually emerged. “Every day I work with images of the galaxy visible as we know it today, and I expected the underworld of the galaxy to be very different but very similar. I did not expect such a drastic change of form.”

How to deal with deceitful colleagues