AMD’s AM5 platform with LGA-based Ryzen 7000 processors with 1,718 threads in the socket is getting closer and closer. So it is not surprising that the first standards now gradually see the light of day in the form of leaks. So there is now a first benchmark with a six-core Ryzen 7000 processor, which has taken a seat on the Gigabyte X670E AORUS Master. 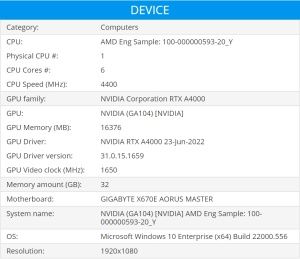 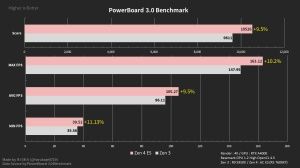 Although only one benchmark was used, it actually gives a small preview of the performance difference between Zen 3 and Zen 4. In the synthetic area. The PowerBoard 3.0 benchmark not only shows the result at the end, but also the minimum, average and Max FPS. The six-core Zen 4 processor has been compared to the Ryzen 9 5950X, which has Zen 3 architecture. Despite the significantly smaller number of cores in the “Ryzen 5 7600X”, it scores nearly 1,000 points – or in other words, 9.5% – more From the flagship Ryzen 5000.

According to the graph, the minimum FPS showed a difference of 11.13% in favor of the Zen 4 processor, while it was 9.5% more on average. But the biggest difference was in the maximum FPS values. The Ryzen 9 5950X maxed out at 147.95 fps, with a hexa-core processor with Zen 4 architecture bringing it to 163.12 fps.

It won’t be long before AMD releases its new AM5 platform including Ryzen 7000 processors. Until then, more leaks will surely be published that will show more performance differences.