The September 23, 2022 radar visualizes radio returns reflected from structures beneath the surface of Mars’ moon Phobos. The continuous bright line shows the echo of the moon’s surface. Reflections passing under it either reflect features of subsurface structures or originate from objects on the surface itself. The graphic at the bottom right shows the scanned path along Phobos’ surface.
Copyright: ESA / INAF

Bologna (Italy) – Unlike planet Earth, Mars has two moons, albeit much smaller: Phobos (Fear) and Deimos (Panic). In particular, the larger of the two moons of Mars, Phobos, has repeatedly caused various speculations in scientific frontiers. In the 1960s, some astronomers speculated that Phobos might be an artificial body. Now, for the first time, the European Mars Express probe has successfully used radar to search under the surface of Phobos, which is 27 kilometers in diameter, and has already discovered previously unknown structures here.

Like the European Space Agency ESA reports offlineThe MARSIS radar instrument is already dedicated to studying the interior of Mars from a distance. And while Mars Express orbits the Red Planet at a distance of more than 250 kilometers, it approached Phobos at the end of September 2022 at a distance of only 83 kilometers. Due to an update of the instrument’s software, which uses low-frequency radio waves and their reflections to look beneath the surface of Mars, the first glimpses under the surface of the larger Martian moon are now possible.

“So close to Phobos, we were able to study its structure in much more detail than ever before,” reports MARSIS Project Director Andrea Cicchetti of the Italian “Instituto Nazionale di Astrofisica” (INAF).

my knowledge
Mars Moon Phobos: The United States once speculated about an artificial origin

Phobos still orbits the Red Planet at a distance of less than 6000 km from its surface. However, it is likely that the Moon will fall on Mars in about 50 million years – after all, it is already approaching its planet by an additional 1.8 meters every 100 years.

In the 1960s, some astronomers suspected that Phobos might in fact be a space station for a former Martian civilization — they even reported it to US President Dwight D. Eisenhower in 1960.

According to a report from the European Space Agency (ESA), scientists led by Dr. Fred Singer, the special advisor to the President of the United States at the time on space issues.

Until then, calculations showed the unusually dense orbit of the Martian moon, and scientists suspected that Phobos’ approaching about five centimeters per year was caused by the Martian atmosphere. However, further calculations by the Russian astrophysicist Samuilovich Shklovsky revealed that in order to undergo such gravity, Phobos itself must be nearly hollow. If the moon of Mars consisted of solid rock, the effect on the moon would not be noticeable. However, a hollow moon would be more impressive, as it would have a much lower mass.

However, if Phobos was indeed hollow, it wouldn’t be a natural thing, concluded Singer at the time, who later informed Eisenhower of the possibility that it was an abandoned space station.

In 1964, Estonian astronomer Ernst Obek also speculated about three possible explanations for Phobos’ unusually low and rapidly descending orbit. In the Irish “Astronomical Journal” it was initially suspected that it could be an error of observation or that the Moon must be an artificial object.

Ubik’s third explanation was eventually to solve the Phobos mystery when he blamed Mars’ gravity on the irregular shape of Mars’ moon, which in turn leads to tidal forces that gradually pull the moon closer to the planet.

In addition to the vision that Phobos will one day collide with the surface of Mars and leave behind a huge crater, some astronomers have recently begun to believe that tidal forces, increasing due to the ever-increasing approach, are actually breaking Phobos. The resulting debris and fragments will form a Saturn-like ring around Mars.

www. Grenzwissenschaft-aktuell.de
+ over here Can you do that Free daily newsletter GreWi request +

By recording and analyzing the signals reflected by underground structures, ESA scientists can draw conclusions about the internal structure of the object under examination. 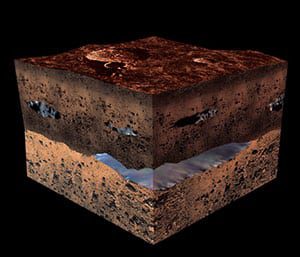 The MARSIS instrument has been applied to Mars, and has already been able to detect different layers of ice, rock, and water in the Earth’s interior (see figure on the left). The internal structure – and thus also the origin – of the two moons of Mars has been a mystery until now.

“Whether Mars’ moons were captured asteroids or bodies ejected from Mars once remains an unanswered question,” explains Colin Wilson, Mars Express mission scientist. “Although their shape suggests they are asteroids, the way the two objects orbit Mars suggests otherwise.”

Although assessments of the new MARSIS data are not yet complete, one can already see “previously unknown structures and features under the lunar surface,” Cicchetti comments in the conclusion.

How to deal with deceitful colleagues