Small smartwatches in particular, also known as wearables, benefit from particularly efficient SoCs, since their battery capacity is far from being able to keep up with the electricity storage devices built into smartphones. Qualcomm has now officially introduced the Snapdragon W5 Gen1 platform, which not only increases performance, but also increases efficiency. In addition, the features have been slightly expanded.

Qualcomm compared the new features of the Snapdragon W5 Gen1 platform with the in-house Wear 4100 platform. From the smaller production stage of SoCs and PMICs (System on Chip and Power Management Integrated Circuit) at 12nm and 28nm to just 4nm and 22nm, Qualcomm expects that in terms of additional power features like hibernation and deep sleep, power efficiency will improve by 50% . LTE modem consumption in standby mode is also improved.

Qualcomm managed to reduce the height of the SoC from 0.69mm to 0.48mm. As the SoC and PMIC improve – due to double the power efficiency – the relatively small battery in particular is more protected. At the same time, more compact and thinner wearables can be produced.

Four Cortex-A53 cores are still dormant inside the new SoC, but the M0 core has been replaced by a faster 250MHz M55 core instead of 50MHz. Previously, a 750MHz 32Gbps LPDDR3 memory chip could be paired with the Wear 4100 platform. With Qualcomm’s new Snapdragon W5 Gen1 platform, capacity is halved with a 16Gbps LPDDR4 chip (2GB instead of 4 GB), but with 2133MHz, they provide much more performance. Overall, Qualcomm stands for Double Daily Performance. 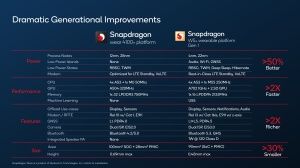 Other changes include support for Bluetooth 5.3, instead of the previous Bluetooth 4.2 and 5.0. GNSS (Global Navigation System) features with L1 + L5 and PDR (Pedestrian Dead Reckoning) have been upgraded in version 4.5 to improve location accuracy.

Pankaj Kedia, Senior Director of Product Marketing for Smart Wearable Devices, noted that Qualcomm is already in close contact with wearable manufacturers to promote the official marketing of the Snapdragon W5 Gen1 platform. Of course, this also happens in cooperation with Google, which provides not only Wear OS as an operating system, but also the operating system itself. He expressed his wish to launch Pixel Watch which could receive Qualcomm’s new SoC infrastructure.