Mozilla has released version 2.9 of its VPN clients for Mozilla VPN. A free 7-day trial can now also be started on the smartphone.

With Mozilla VPN, Mozilla offers its own VPN in cooperation with Mullvad, in addition to being very easy to use, it promises fast performance, security and privacy thanks to the modern and great WireGuard protocol: no usage data is logged and it does not work with an external analytics company, to create user profiles.

Mozilla VPN now includes a tutorial and quick tips articles to help you use the software.

Smartphone users are given the option to sign up for a 7-day free trial of Mozilla VPN at launch.

Regardless of this, there is of course still the option to get your money back within the first 30 days if you don’t like it.

You can now check directly in Mozilla VPN which subscription is currently active and how long it has lasted. 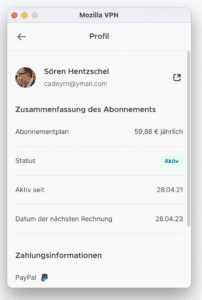 As always, there are many bug fixes and improvements under the hood.

Tip: Mozilla VPN is 17 percent off

Advice for anyone interested: Mozilla currently still offers its own VPN 17% summer discount on me.

Media: US Representative wants to give up a job because of a CV relationship