According to the Progressive Policy Institute, Amazon is number one in the United States. The amount invested in logistics, green infrastructure and technology centers by 2020 was nearly US $ 34 billion.

In the top 3 are Amazon, Verizon and AT&T

“We see Amazon having historically high investment performance. The company’s $ 45.7 billion in global capital expenditure surpasses even peak investments in industrial companies such as General Motors, General Electric and IBM.” According to the PPI. “Recently, we have seen that even large investment firms like Amazon can be great job creators. In particular, the cost of automation of Amazon filling centers has increased productivity and allowed the company to maintain a minimum wage of $ 15 per hour, which is $ 15 to $ 17 in many parts of the country. The entry level in production is comparable to wages. “ 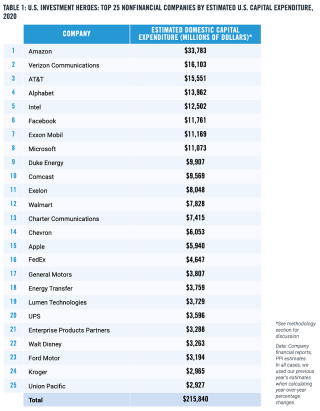 See also  OECD President: G7 tax deal not much support for US - economy -