While Huawei is working hard to bring Chinese versions of its smartphones HarmonyOS To switch, international devices still run on EMUI. It seems that nothing will change in the short term. The company has just published a list of devices that will be updated to EMUI 12 starting in 2022.

Huawei does not say which Android EMUI 12 version it is based on, but after the recently revealed version Nova 9 One can assume that it is Android 11. However, this will be a huge step for the users. Older devices like this B20 Pro It has been running on Android 10 years ago. Here is the official list: 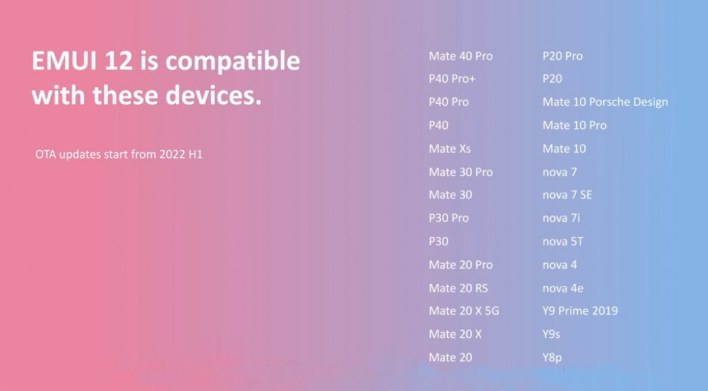 Newer device owners like Huawei Mate 40 Pro or that P40 Pro You can expect a beta version of the software in the coming months. Similar to Harmony OS 2.0, EMUI 12 places great emphasis on integrating the Huawei ecosystem. This includes easy file sharing and remote control of various Huawei devices.

New animations and design elements are also on board, and probably the biggest change to the user interface is the notification screen. EMUI 12 is now divided into two areas. If you swipe down from the left side of the status bar, notifications open, while quick settings, brightness control, and media controls are called up from the right side. Just like with MIUI and Apple iPhone.