If the system starts for the first time after compilation or if a new XMP profile is started – the first boot process can take some time and the so-called memory training is usually to blame. This describes the process by which the processor and main memory negotiate or coordinate different clocks and timings.

Twitter @9550pro (Across Video Cards) Image of the ASRock X670E Steel Legend, which still has a label above the four DIMM slots. 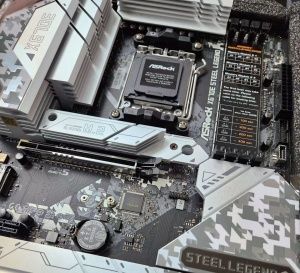 This shows that ASRock is describing a specific configuration (which it is currently doing), but it also indicates that the first boot process can take a little longer. With 2x 16GB, which will certainly be the standard configuration for many, the first start (or after a CMOS reset) actually takes 100 seconds. 2x 32GB should take 200 seconds. If all 4 DIMM slots are populated, it can take 400 seconds with 4x 32GB – that’s a good 6.5 minutes.

Even today, depending on the platform, the system may take some time to complete the boot process after the initial component assembly or CMOS reset. However, this does not usually take several minutes on desktop platforms. The situation is different for servers that have eight or more memory channels and aggregate more than one unit per memory channel. Booting up or memory training can take several minutes here.

It’s unknown if only ASRock has long boot times after the initial installation, or if this is a general issue. The label should be a hint so that the buyer of this board does not get nervous when they first start it up and abort the boot process prematurely. This can certainly prevent many support requests. According to reports, AM5 platforms still have DDR5 support. So many AGESA updates are expected, especially soon after the start. Even before the first motherboards are available, there are many updates to report, often showing improvements in memory support. Memory training should also be speeded up with these updates.