Noctua has to move products significantly

Noctua has updated its roadmap and offers an outlook until the third quarter of 2023. Anyone currently waiting for the NH-D15 successor should be patient. As can be seen from the planning, the new generation of the flagship Noctua model will not appear until the first quarter of next year. So far, only the NA-STPG1 as well as the NT-H1 and NT-H2 (3.5g) version of the AM5 are planned for the fourth quarter of 2022. In addition, Noctua intends to launch the next generation of its 140mm propellers.

In the first quarter of 2023, we will continue to use the already mentioned coolant and NH-L9a for the AM5 socket. Additionally, a 24V to 12V voltage converter, eight-way fan hub, and unmarked fan grills should also be available. A slim 60mm fan and 24v 40mm fan will follow in the second quarter. In Q3 there is a desk fan and fans painted white. 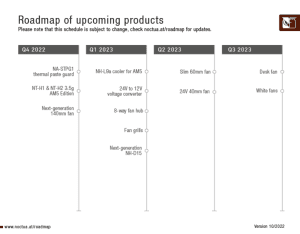 It remains to be seen if Noctua can stick to its schedule or if there will be further delays in the release of said products. The information provided is only the current planning status. Noctua explicitly states that further delays cannot be ruled out. The company cites more research and development or technical improvement as possible reasons. Production capabilities and coordination with other projects may have a negative impact on the manufacturer’s plans.

Already submitted yesterday Noctua new framework for closing AM5 processors. The heat-resistant polycarbonate cap seals the edges of the heatsink and, according to the manufacturer, can be easily put on and removed again. More information can be found over here.

See also  Sonic the Hedgehog: break the record for 30 years!