NVIDIA introduced a number of innovations at the fall GTC. First of all, people never tire of emphasizing that the first hopper accelerators, also known as the H100, should be delivered in October. These are the PCI Express variants, while the SXM4 models are still a long way off.

Image recognition in medical applications described the first real new GTC presentation. NVIDIA has been active in this field for a long time and of course previous hardware platforms can already be used for this. But the NVIDIA IGX is an AiO platform dedicated to this area.

IGX is a circuit board that contains all the necessary components. The Orin TOPS 250 computing power unit is the basis on which other components are connected. The RTX GPU based on the Ampere architecture is responsible for the actual computing power and achieves up to 600 TOPS. ConnectX-7 offers 400 Gbps network connections here.

Of course, data and device security as such is also important in the medical field. There are so-called security islands and real-time hardware monitoring.

Medical device manufacturers can develop their hardware and software based on existing NVIDIA system platforms, starting here with Origin and then switching to the IGX platform. Above all, NVIDIA wants to use this unified platform to speed up development time. IGX should also be used for automation in the industrial sector. 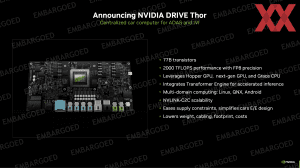 There is a name change in the automotive sector. Drive Atlan becomes Drive Thor. But not only the name changes, but also the performance. This should be doubled. Drive Thor is a hybrid chip with ARM cores and a GPU. But the architecture behind Hopper must also be used here. Exactly how this should look, NVIDIA has not wanted to reveal yet.

Drive Thor 2000 is expected to achieve TFLOPS. Drive Atlan should be about 1,000 TFLOPS. Just as with the Grace super chip or the Grace Hopper super chip, NVIDIA connects the just mentioned chips using NVLink C2C interconnection.

In addition to some hardware announcements, NVIDIA is also increasingly becoming a cloud service provider. For large data sets, there is NeMo LLM as a cloud AI service and BioNeMo LLM is targeting the medical field. NVIDIA now also offers direct cloud services in many other areas. More will surely follow.