Banzernacker wanted and found – safe unlock reveals secret At the end of November, EVN began the search for armored crackers that were supposed to open a forgotten vault.

The 800-kilogram safe has been standing for decades on the site of the power plant of the former coal/gas power plant, Bisching. Unfortunately, neither the content nor the corresponding key was found. For a “cute” opening, it has now been brought to the site of its future exhibition at the historic Zwentendorf Nuclear Power Plant.

The secret was revealed by the Lower Austrian Alexander Seguin. The specialist from Tresorservice Unger is one of the few who dared to open the safe without the use of force. After all, a beautiful historical piece should not be damaged. An art that not many have mastered today: “We are talking about dozens of people at most throughout Europe,” one hears from police departments.

Speculations on the net ranged from “there will be nothing” to “old stocks” and “company documents”. “Unfortunately, we have to disappoint all those who expected gold,” EVN spokesman Stefan Zak says. “The safe had old company documents, ID cards, blank coin cases and two spare keys—but not for this safe. Also of interest is a gold brooch that we have to take a closer look at.” 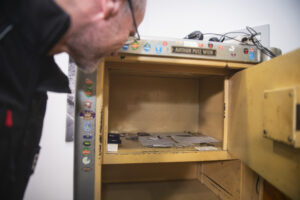 The Panzerknacker hotline was running hot

“Broadcasts outside of the main business have rarely caused so much excitement,” Zack laughs. “People love secrets.”

The phone rang nonstop for several days. Zach talks about a lot of “cute and funny calls” here. At the same time, it made him think a little about how many times he had heard the sentence: “I know someone who can do this…”. It seems that there are many tank crackers in our country. Or at least a lot of people “interested in technology and locks,” Zack smiles. 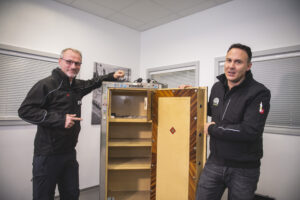 By the way, the most popular recommendation was LockPickingLawyer, a YouTube influencer with around 3.6 million followers.

_Tresor3: The secret has been revealed. The safe contained old company documents, ID cards, blank coin cases, a gold brooch, and two spare keys – but not for this safe

_3804: Stefan Zack at the former site of the Baixing coal/gas power plant