Apple has updated the graphics options for the Mac Pro. There will be three new maps based on the Big Navi GPU, or more precisely Navi 21, from now on. The Radeon Pro W6900X uses a Navi-21 GPU with 80 compute units or 5,120 shaders. The 32GB GDDR6 graphics memory is connected via a 256-bit memory interface. This is supported by a 128MB Infinity cache, which internally achieves a bandwidth of approximately 2TB/s. The TDP of the card is 300W. The theoretical maximum computing power is 22 TFLOPS for FP32 accounts.

Also new is the Radeon Pro W6800X with 60 compute units or 3,840 shaders. There’s also 32GB of GDDR6 graphics memory and 128MB of Infinity Cache. The TDP also matches 300 W. The computing power is much lower with 16 TFLOPS for FP32 accounts – mainly due to the smaller scaling of the GPU. 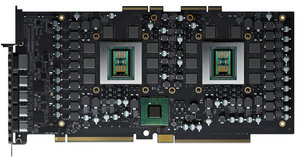 The highlight of the update is definitely the Radeon Pro W6800X Duo. Here two of the last mentioned GPUs are used on the PCB. 2x 60 CUs, that’s 7,680 shaders in total, 2x 32GB graphics memory on a 256-bit interface each, 2x128MB Infinity Cache with 30.2 TFLOPS results in roughly twice the computing power of the single version (for Radeon Pro W6800X). The hourly rate will probably be a little lower, so the information falls a little below. The TDP of the Duo version is 400W.

Apple offers the new cards as MPX (Mac Pro Expansion Module) modules. These are huge modules up to three slots high. The large size of MPX units is due to cooling, because they are cooled indirectly via the airflow in the housing and do not have their own active components for cooling. In theory, each MPX unit can manage a power consumption of 500 watts – in the case of the Radeon Pro W6800X Duo, only 400 watts of this potential is used.

MPX modules are not powered via additional ATX power connections. Instead, this is implemented using an additional slot located behind the PCI Express slot. The power supply is then connected directly via the motherboard. The Mac Pro power supply provides the appropriate connectors for classic PCIe expansion cards.

Alt-J, AVEC and their FM4 sessions