Summer and winter in one week. Thunderstorms included. Temperatures fluctuate between 3 degrees in the morning and about 30 degrees in the afternoon. September is always good for such interaction in this country. Also this week.

As the days get warm (still), they start out cold: on Tuesday, for example, early temperatures in Seckau (Mortal) dropped to 3.9 degrees. In Salzburg Longau (Mariapvar) up to 1.5 degrees! But the sun still has energy these days and with a southerly current from High “Ronald” Temperatures will rise to 26 degrees on Tuesday, and up to 28 degrees possible on Wednesday, says Veronica Hattan, a meteorologist at Zammj. The Ubimet Weather Service goes further and expects a scratch at the 30-degree mark in the southeast on Wednesday.

However, the Southern Stream also has a lot of desert dust in its baggage, which means the sun’s rays will definitely be cloudy.

Also exciting: the typical fall weather conditions are starting to form. So, on a Tuesday morning in several Styrian valleys, the temperature was just over one digit plus a degree, “while it’s only down to 12 degrees in the higher vineyards,” says Hattan.

Thunderstorms on Wednesday and Thursday

If you still want to use late summer during the day, hurry up. The meteorologist said: “On Wednesday, it will be cloudy until the afternoon, also because of the desert dust.” In addition, thunderstorms will also be present on Wednesday and Thursday – as a harbinger of a cold front.

From the current perspective, thunderstorms on Wednesday will be limited to the Upper Styrian mountains, on Thursday they will be possible across the country. Two phones predict that “cold air is pushing itself under warm air, so very strong thunderstorms are also likely.” On Thursday, 26 degrees is possible again in the south.

On Friday, an amazing cold front will spread across the country – these are the slopes of former Hurricane Daniel. For Styria, that means: “It will be cloudy, cloudy and mostly humid during the day,” says Two phones. A cold front will also lead to a lower depression in northern Italy – how this will behave and whether it will also bring large amounts of rain to our latitudes is still open. From today’s perspective, it looks like it was pouring rain over Istria. 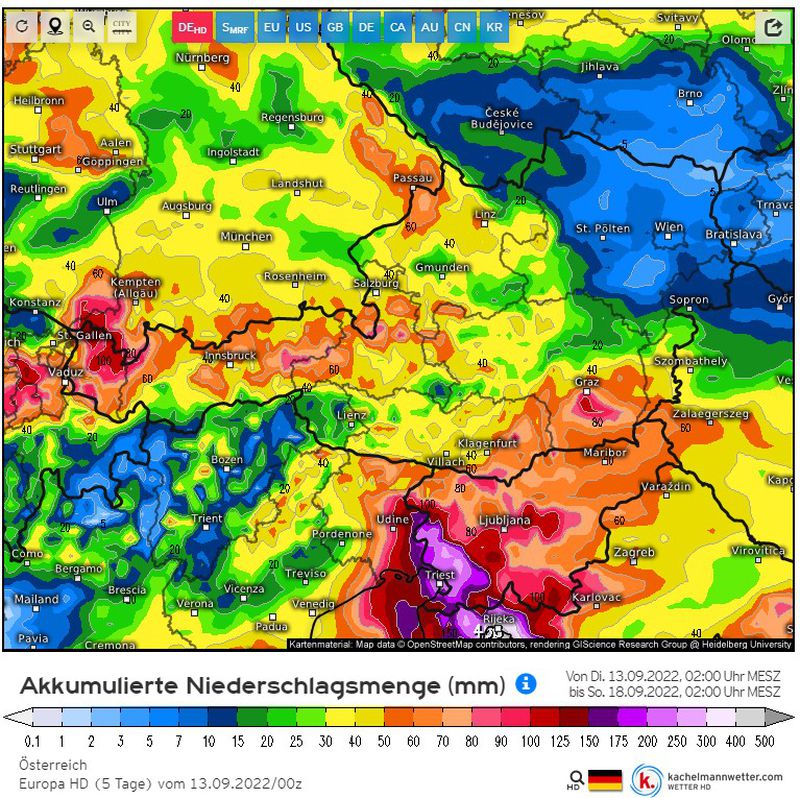 Possibility of rain until Saturday evening – it may rain heavily, especially in the south
© kachelmannwetter.com

However, it appears to have been fixed: “The cold front will continue” – until next week. Hatfan: “The temperatures in the south on Saturday will not rise above 15 degrees, and in Upper Styria it will remain between 10 and 12 degrees.”

In addition, the snow line will drop to 1,500 meters during the weekend. “Mountain tops can also be sugar-coated white.”