SGX aims to create a secure area of ​​memory in which privately secured information is stored. However, if it is even possible to extract such data through side channel attacks, then of course this goes against the idea of ​​private protection.

But some end user software has also relied on SGX, including some DRM management. In order for this to also work with the eleventh and twelfth generation, Intel made it possible for the management engine to load third-party modules. However, it appears that the Blu-ray Association does not know anything about this, and therefore DRM-protected UHD Blu-ray cannot currently be played on a system if it is running an 11th and 12th generation processor. In addition to SGX, HDCP 2.2 and Advanced Content Access System (AACS) 2.0 are also a prerequisite for UHD Blu-ray playback. 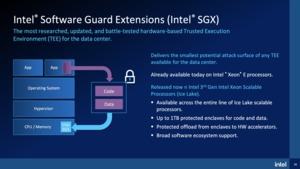 The developer has Cyberlink in a file Instructions A recommendation has since been posted:

For users who are using an older compatible platform and still want to enjoy Ultra HD Blu-ray playback compatibility on PC and with PowerDVD, we suggest they continue to use 7th to 10th Gen Core i series CPUs and motherboards that support Intel SGX feature. You should also consider not updating the operating system (for example, upgrading to Windows 11) and Intel drivers associated with the latest versions, so as not to remove the Intel SGX feature from your computer. “

Therefore Cyberlink recommends that no hardware or software updates be performed in order to continue to ensure UHD Blu-ray playback.

The number of people already affected by this problem is evidenced by the fact that the topic is only being prepared now, while Rocket Lake processors have been around for some time. It seems that multimedia systems with these processors are not often used. In times of UHD streaming, UHD Blu-ray usage will likely continue to decline.

Farming Simulator 22: Patch 1.5 with FSR 2.0, an update for Precision Farming and AGI DLC