What’s new in Firefox 89 for Android

Mozilla has released Firefox 89 for Android. The exact version number is Firefox 89.1.1.

The first visible change you notice after starting Firefox are the larger tiles on the start screen, which provide more space to click. Pinned pages by default now have a pin like pages manually added to the start screen.

The biggest visual change affects the main menu. This has been completely restructured and now looks compact when opened. The remaining list entries can then be made visible by scrolling. This has the advantage that each entry in the list can be accessed with just one hand. 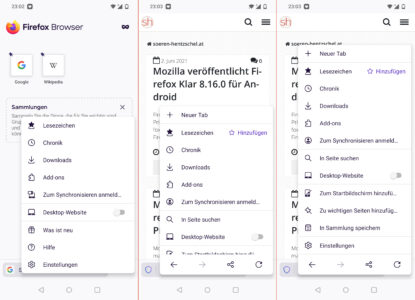 The tab view has been rewritten, allowing Mozilla to display synchronized tabs as a third tab next to the regular and private tabs in the tab view. 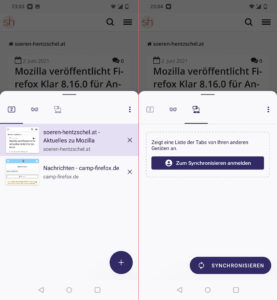 After you quit Firefox using the Exit button in the menu, which appears if Delete browser data is enabled in Settings on exit, Firefox is now also removed from the Android screen with currently open apps.

If you click the Firefox logo five times on the About Firefox screen, you will now see a menu entry called “Nimbus Experiences” as well as so-called “Secret Settings.” Here the user can see when the experiments are currently active.

Firefox now scrolls the page instead of selecting text when using the touchpad.

Other than that, there were of course a few bug fixes and other improvements. Also Weak points It is closed in Firefox 89. So it is recommended to perform an update as always for security reasons only.