How about a Core i9-11900KB, which is now located in Intel ARK Database Back? The internet community is currently asking itself this question, because nothing has been officially heard from Intel about this new model. Based on the naming scheme, it fits clearly with the current eleventh generation of desktop core processors. Found this With a Core i9-11900K with eight cores based on the Cypress Cove architecture, it only recently reached its peak..

However, ARK’s database talks about “products formerly known as Tiger Lake” and the “Mobile” platform. Additionally, production should be done at 10 nm SuperFin. So here everything clearly refers to a portable processor.

The Core i9-11900KB should offer eight cores. This one has 3.3GHz push clock and Turbo to 4.9GHz clock. Should make 5.3GHz thermal speed boost possible. In the mobile sector, Core i9-11980HK is up to 5.0GHz max. 5.3GHz obviously speaks in favor of the desktop version, since that also comes to 5.3GHz if cooling is correct. 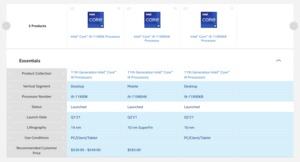 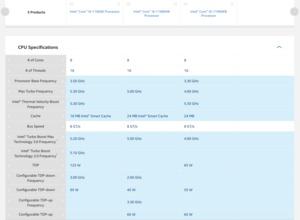 In return, Intel calls for a thermal design power of 55 to 65 watts maximum, which in turn speaks clearly in favor of the mobile processor. This also applies to the size of the cache.

Memory information is also more than strange. The Core i9-11900K achieves a memory bandwidth of 50GB / s, the Core i9-11980HK with DDR4-3200 51.2GB / s and the mysterious Core i9-11900KB only 45.8GB / s. The hardware ID cannot be found yet so it could simply be a wrong entry or a placeholder. By the way, Intel specifies FCBGA1787 for the package. Package size is listed as 42mm x 28mm, which actually corresponds to the dimensions of the FCBGA1440 or associated processors.

Until Intel clarifies what the Core i9-11900KB is about or the entry is simply deleted again without comment, we’d probably be in the dark.