Under the slogan “XPG XTREME INNOVATION”, ADATA has released several new announcements from a variety of product areas. Here too, the first DDR5 memory will be introduced soon, starting with 8400Mbps and 1.1V, which marks the entry to this new memory standard. Also indicated are the dual capacity of the modules and the fact that the memory chips themselves have an error correction code (ECC) during operation, that is, error correction at the memory level. At this point it should be noted again that this does not allow for any error to be detected on the way from the memory module to the memory controller, as is usually the case in ECC.

DDR5-8400 is not only the entry point into the end-client area, but it will also find its way into the server area in this model. 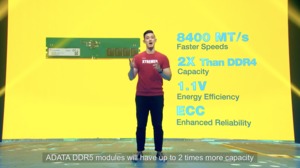 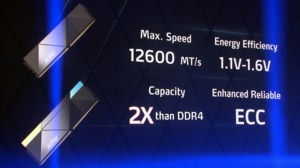 Additionally, ADATA gave an overview of what to expect in the future regarding DDR5 via the XPG division. XPG variants should achieve transfer rates of 12600 MB/s, which is nearly four times as many transfers per second as with DDR4-3200. DDR5-8400 to DDR5-12600 roughly corresponds to the jump from DDR4-3200 to DDR4-4800. For this, the memory requires a voltage of 1.6V – significantly more than 1.1V according to the DDR5 standard.

Intel Alder Lake processors will be the first to use DDR5. AMD will switch to DDR5 only with next-gen Ryzen next year.

At this point, we would like to show you a YouTube video. Protecting your data is important to us: YouTube sets cookies on your computer by embedding and turning them on, by which you may be tracked. If you want to allow it, just click the play button. The video will then be uploaded and then played.