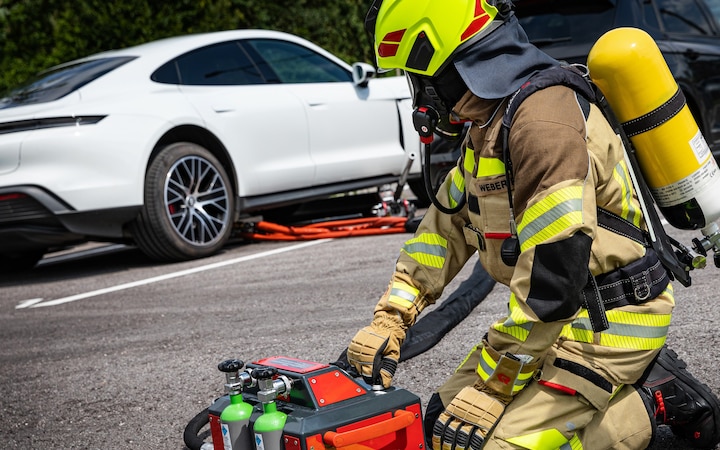 Rosenbauer International AGRosenbauer’s electric vehicle extinguishing system operates in a targeted manner and can be operated remotely, which means more safety for firefighters.

Contrary to popular belief, massive amounts of extinguishing water or even water-filled containers are not always necessary for battery fires in electric vehicles. Good battery cooling is important, which often can only be guaranteed with plenty of water. However, the Austrian manufacturer of firefighting equipment Rosenbauer has now introduced a new product that is supposed to reliably extinguish a burning battery with a little water.

Firefighting equipment manufacturer Rosenbauer launches a new extinguishing system for lithium-ion batteries in electric vehicles. The system must be able to safely and efficiently erase high-voltage batteries. The focal point is to cool the battery modules or cells inside the modules as directly as possible and thus interrupt the chain reaction of the burning cells.

The system consists of two main components, an extinguishing unit and an operating unit, which are connected to each other by hoses. The extinguishing unit is placed directly on the battery – if necessary – supported on the body or other points. Firefighters can safely activate the system via the control unit from about eight meters away from the vehicle, at which point a special fire pin is inserted into the battery with a force of up to several tons. There the extinguishing water is supposed to reach the inside of the battery through a perforated extinguishing shaft. The water should completely fill the battery and cool it efficiently. Rosenbauer’s Promises in One press releaseThat the amount of water in the regular fire truck is sufficient to extinguish the battery. 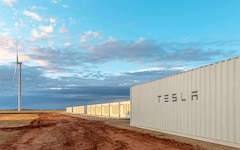 Tesla’s biggest battery fire: The fire brigade was put out for four days

In Australia, a Tesla “Megapack” battery unit at a large Victorian battery facility caught fire last weekend. It is assumed that the massive battery system will go online at the end of this year and will then have 300 MW of power and 450 …

Until now, a large amount of water was often required to cool a burning battery that could ignite again without this cooling. Some will burn electric cars Until they are raised in a container filled with water for 24 to 48 hours to prevent re-ignition. However, this is usually not necessary at all, recently announced Also Christoph Emmerich, chief firefighter at the Munich Fire Service. Instead, it is important to cool the battery in a targeted manner, which the Munich fire brigade does in part with a jet tube attached to the bottom of the car.

Rosenbauer’s new invention works in a very similar, albeit more specialized way – but the fact that it can be operated from a greater distance ensures greater safety for firefighters. The preferred position of the Rosenbauer fire extinguishing system is between the road and the vehicle when the vehicle is on all four wheels. However, it is also possible to enter the system via the interior compartment and the luggage compartment or from above if the vehicles are located on the side or on the roof. 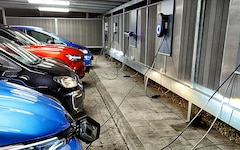 ADAC tested: These are the best wall boxes in 2021

Six Wallboxes eligible for KfW funding were selected and tested this year by ADAC under certain conditions. Results…

Six Wallboxes eligible for KfW funding were selected and tested this year by ADAC under certain conditions. Test results as well as all important information about home charging stations can be found here. Start…

After the battery has cooled down sufficiently, the affected vehicle can be moved away. According to Rosenbauer, the extinguishing system can remain in the battery during transportation and in the quarantine area and can be quickly reactivated at any time.

The system has been tested in numerous fire tests by Rosenbauer with a variety of battery designs, pouch vpn, prismatic cells and round cells in various vehicle platforms. In addition, professional and volunteer firefighting teams in factories in Europe have been testing the system for several months using their operational tactics, operational techniques and teams and have been able to demonstrate its compatibility with existing resources and tactics.

You may also be interested in: Are electric cars really dangerous in underground garages? Professionals do the fire test

Cities banned electric cars in underground garages — and at one point they lifted the ban reluctantly. Is burning electric cars more dangerous than burning gasoline and diesel? On behalf of the Federal Road Office in Switzerland, a Swiss institute conducted a heated test with a clear result.